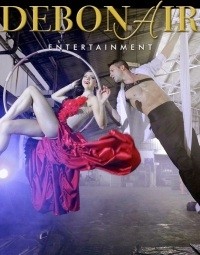 Under the direction of Steven Watson (ex aerial duo Belle Air), one of Australia’s most established performers and visionaries, Debonair delivers unique aerial shows to corporate and special events.

Customising events include concept development, theming, costume design and styling as well as custom designed music.  All these production elements come together resulting in unique never seen before performances.

Bringing more than 15 years performance experience, Steven has worked in almost all facets of production from the early stages of show creation through to opening night.  With an international career spanning across dance, choreography, fashion and circus he has worked with some of the most influential stage choreographers of their time namely Eartha Robinson, Karen Bruce and Meryl Tankard.

He also worked on all 3 seasons of Australia’s ‘So You Think You Can Dance’, where he was also invited to guest on the UK show, assisting on 3 routines with the top 20 dancers.

In most recent years refining his circus skills from his Sydney base. In 2009 winning the Australian Pole Dance Championships (men’s division) and 2011 a semi-finalist in Australia’s Got Talent as part of aerial duo Belle Air.  As both performer and creative director of Belle Air Steven cemented his position as an aerial choreographer focusing heavily on uniting high level skill with narrative story telling.  Steven believes many under estimate the importance of connection with an audience, whether it abstract or narrative, communicating a journey is of paramount importance.

Years of dance, adagio, choreography and production experience fuse with his need for artistry and athleticism to deliver thrilling, never-seen-before aerial sequences.

Steven, you were an absolute pleasure to work with - you guys were definitely the highlight of my night! I could not recommend you more to someone - your professionalism, your communication and above all, your amazing aerial act which was adapted so well to our event - second to none. I will most definitely pass on your details to anyone who might be interested in something extra for their event.

It was an absolute pleasure working with Steven and his girls, they are some of the loveliest entertainers I have worked with, and exceptionally talented.

Steven it was wonderful to work with you and there were many compliments about your performance yesterday. Thank you for everything! You guys are amazing! I hope we get the chance to work together again.