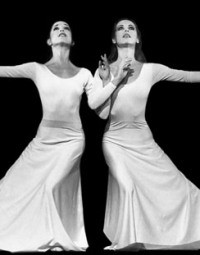 Michelle and Rosetta are former Principal Ballerinas of the Queensland Ballet. They combine their extensive experience to provide exquisite ballet and contemporary dance performances for corporate events.

Performances can include any number of dancers and can be tailored and costumed to suit any event theme.

Michelle Giammichele commenced her professional career in ballet with The Queensland Ballet in 1981 at the tender age of 17 as a dancer and stayed with the company for six years gaining tremendous experience and performing principal roles.

When she married, she travelled overseas for two years to further her experiences and danced with Vienna Ballet Theatre and the London City Ballet before returning to Australia in 1989.

She returned to The Queensland Ballet bringing with her a greater maturity and a strengthened interpretive ability. Upon her return, Michelle won outstanding critical acclaim for her roles as Titania in A Midsummer Night's Dream, Herodias in Harold Collins' Salome, Bianca in Shakespeare's The Taming of the Shrew, Giselle, and the Princess in Natalie Weir's Medea.

In 1993, Michelle continued her overseas exposure representing The Queensland Ballet with an invitation to dance in the highly prestigious "The Night of the Stars" Gala in Noumea, New Caledonia. She performed alongside principal dancers from the Paris Opera Ballet, the Alvin Ailey Dance Company, The New York City Ballet and two Russian dancers. After rapturous audience response, Michelle was invited to perform there again in 1994.

She accompanied The Queensland Ballet's first overseas tours to New Zealand and to the United States of America.

During her career with The Queensland Ballet, she amassed two decades of dance, an amazing accomplishment in the competitive and demanding world of this profession.

Following her retirement in the year 2000, she received an appointment from the honourable Minister for the Arts, Mr. Matt Foley to represent the dance contingent to the Board of Trustees of the Queensland Performing Arts Trust (QPAT).

In 2003, Michelle received the Centenary Medal for her contribution to dance while living again in London. She shared the presentation with other famous Australians at a ceremony in Australia House, London.

Upon her return to Australia in 2004, Michelle has been a guest teacher for various schools around Australia and adjudicated in many Brisbane Eisteddfods. In 2007 she co founded a ballet dance school for adults with Rosetta Cook.

Rosetta Cook has had wide-ranging career as a director / choreographer, performer and teacher in dance, theatre, film and television. She began her career as a dancer and was Principal Ballerina with The Queensland Ballet from 1982 - 1992. During this time she danced numerous diverse roles, renowned for her interpretation of Salome, Carmen, Giselle, Romeo and Juliet, Scheherazade and Alice in Wonderland. She was also a member of Sydney Dance Company and has performed as Guest Artist with many other companies and on television. Rosetta received an Advance Australia Award for her outstanding contribution to dance in Australia.

During the 90's Rosetta moved into contemporary dance, theatre and film, performing in a diverse range of productions. Some of those include, John O'Connell's ballroom cabaret comedy Mr. Cha Cha Says Dance as Mme Rhumba, Fall of Singapore with the Sydney Theatre Company, and the lead role in The Empty Lunch Tin, for Theatre of Image and in Baz Luhrman's film Moulin Rouge. During this time Rosetta began to learn tango and has been dancing it ever since.