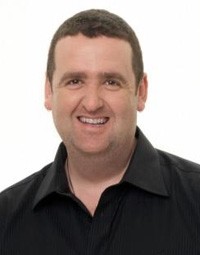 Alan is a 6 foot 4 inch, Sagittarian who enjoys Pina Coladas. Alan Brough was born in New Zealand and has been performing as long as he can remember. His first ever role was as the titular Drummer Boy in The Little Drummer Boy. (Though halfway through a searing drum solo he stopped and waved at his Mum and Dad.)

After failing to attend university enough to be considered a student, he worked in Wellington and Auckland as an actor, working predominantly in live theatre. He was also, for a time, New Zealand's most famous transvestite due to his appearance on a series of butter commercials as a very ordinary looking drag queen called Marge.

Alan moved to Australian in 1995 and has worked on Kath and Kim, films such as The Craic and Bad Eggs and a national radio show on Triple M with Mick Molloy and Robyn Butler called Toughlove. However it is on Spicks and Specks he has really found his calling. It combines all Alan's great loves; comedy, music trivia, regular wages and nice shirts.