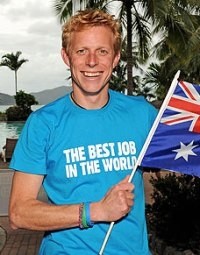 Ben Southall is a presenter, digital journalist and adventurer. His achievements include beating 35,000 to win the Best Job in the World in 2009 and became the ‘Caretaker of the Islands of the Great Barrier Reef’ in Australia.

In 2008 he climbed five of Africa’s highest mountains and ran five marathons during his circumnavigation of the continent with his Afritrex expedition. During 2011 he kayaked 1600kms along the Great Barrier Reef retracing Captain Cook’s ‘Voyage of Discovery’ with the Best Expedition in the World.

In 2016 Ben and his wife Sophee completed their Best Life in the World expedition – a 55,000km, 12-month drive through 33 countries from Singapore to London. They both run successful travel websites that have become portals for would-be travellers from around the world.

He has presented his own series The Best Job in the World on Nat Geo’s Adventure Channel, which aired in more than 315 million homes in 165 countries and 34 languages. Ben works with the television networks in Australia and writes for a number of print and online communities. He is an Ambassador for Alton College, Tourism Queensland, the University of Queensland Business School, Alpina Watches, and a Patron of Sailabilty, a disabled sailing charity.

Ben’s production company creates digital video content and offers social media consultancy for a number of industries. He uses these skills to document and publicise his own adventures around the planet.