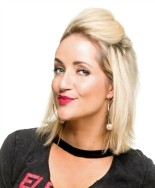 Three time winner of Australia's Best Radio Personality, Bianca Dye is a warm and cheeky voice, with a wit and style that endears her to the many celebrities she’s interviewed!

Madonna, Nicole Kidman, Michael Bublé, Justin Timberlake, Robbie Williams, Pink, and Kylie Minogue are just a few of the stars that have opened up and shared their stories with Bianca.

Bianca has worked in Sydney on NOVA96.9, had a successful stint as #1 Breakfast show at i98fm in NSW and is currently back in her home state of Queensland, where it all began at the Gold Coast’s GOLD FM Drive show.

In January 2017 Bianca joined the 97.3 FM Breakfast Show with co-hosts Terry Hansen and Bob Gallagher. By July the team were celebrating being the #1FM Breakfast show in the market.

Bianca is not just a radio personality, having anchored her own show "Access All Areas" on Foxtel's Arena and appearing regularly on A Current Affair, 20 to 1, and Thank God You're Here.  She is also a regular guest, known for her honest opinions and playful personality on Ten’s Studio 10 and The Project as well as 9’s TODAY Show and 7’s The Morning Show.  You'll find Bianca now with Hit90.9fm Gold Coast breakfast radio.

She has also co-written a book called "Playing Hard To Get" and is in the process of writing her second book on living with anxiety.

Bianca is a passionate national voice for mental health awareness. She is also an ambassador for many animal-based charities including the Orangutan project (TOP) & the RSPCA.