Boys in the Band Travels From Sydney, NSW 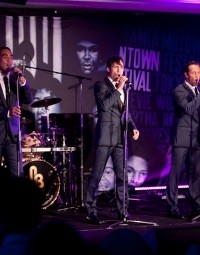 Over a year in development, Boys in the Band showcases some of the most talented, versatile, handsome and hip young guys the Australian entertainment industry has on offer.

Boys in the Band celebrates the world’s greatest hits from the most iconic bands of the 20th Century including The Jersey Boys, The Beatles, The Jackson 5 and The Bee Gees. Choreographed by one of Sydney’s best choreographers Cameron Mitchell and dressed by Australia’s leading men’s designer Arthur Galan, this is an all-singing, all-dancing, audience interactive show that will have the audience jumping out of their seats!

The show features such classic tunes as Walk Like a Man, Sherry, Can’t Buy Me Love, Blame it on the Boogie and Staying Alive to name just a few. Boys in the Band has been created with meticulous attention to detail the show can be performed to either fully orchestrated backing tracks or a funky band that can then go on to play dance sets if so desired.

If you want your audience to be saying ‘Oh What a Night’ then Boys in the Band is the show for you!

Boys in the Band is performed as a trio or quartet depending on the size of the audience and your budget.