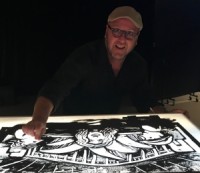 If a picture tells a thousand words you're going to need a cartoonist at your next conference. Brett Bower sketches up your concepts live in front of your audience. His cartoons and illustrations reinforce your ideas and help your audience retain the key points you want to deliver.

He can hand sketch posters and flip charts as well as sketch and animate digital images that can be projected on to the big screen and printed at your event.

No matter what industry Brett can add some fun to your next event.

Brett is also available as an entertainer. He performs an incredible Sand Art animation act where he creates visually stunning shows created in sand to emotive music (projected for all to see). As a caricaturist Brett can also provide fun, take home, entertainment for your guests/delegates.

Brett is an award winning cartoonist, starting his professional career as an animator in 1982 working on animated classics such as Scooby Doo, Christmas Carol, Oliver and various TV commercials.

He has worked in the UK and North America as a cartoonist and is a former Vice President of the Australian Cartoonists Association. Brett speaks at events around Australia and New Zealand on topics such as "Draw Your Own Boss" and "Visual Thinking".

Producing quick cartoons and caricatures while he presents, Brett has the natural talent and personality to make your event a success. He has facilitated workshops in Australia, New Zealand and America in recent years bringing creativity into a wide range of topics.

He has had many media appearances including The Today Show, Australian Idol, and Big Brother. Brett is in constant demand by the corporate industry and appears at more than 100 events each year.