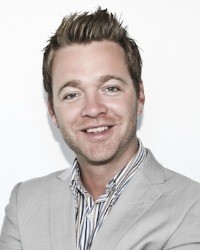 Brodie has quickly developed a reputation as a vibrant, energetic and enthusiastic host and MC, working across all media platforms, right across Australia, for over a decade. His big break was landing the role as the zany host of the late night TV game show, “Quizmania” on Chanel 9 in 2007.  His ability to talk underwater, think quickly and respond appropriately, allows him to take on roles with enthusiasm and confidence, whilst never straying from his carefree nature.

Whether it be on the Morning show with Larry and Kylie, or in the middle of the MCG pumping up his mighty Magpies, or over the road at AAMI Park as the Storm’s on ground MC, Brodie is versatile; a consummate funny professional. Just put a microphone in his hand and stand back. This reputation sees clients repeatedly booking him annually, representing brands such as Johnnie Walker and Schweppes, nationally. His on-camera presence and quick, light-hearted wit have provided an easy choice for clients looking to appeal to the impressionable 15-35 demographic.

Brodie regularly donates his time to such charity organisations as the Cancer Council Victoria, Camp Quality, TLC, The K.I.D.S. Foundation, PLAN, The Royal Children’s Hospital and the JDRF, and is an Ambassador for the Skin & Cancer Foundation, World’s Greatest Shave for the Leukaemia Foundation and Make Poverty History organisations.

He achieves balance in his spontaneous, topsy-turvy, “Jack-of-all-trades” lifestyle by taking a keen interest in art, having now had several successful exhibitions for photography and painting, and completed his Bachelor of Design in 2005. He is a moviegoer, loves the music scene, and doesn’t mind getting his green thumb on with some side project landscaping. Brodie is mindful of the importance of time management, balancing family and work commitments, having recently become a new Dad to a bubbly baby girl, Eden, a baby sister to his energetic three-year-old, Marley.