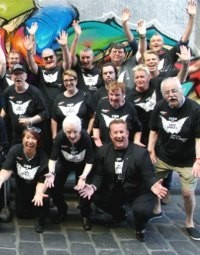 The Choir of Hard Knocks began rehearsing on September 13, 2006 under the inspiring musical leadership of award winning singer, conductor, composer and recording artist, Dr Jonathon Welch AM. Created initially as a television construct by Jason Stephens and Fremantle Media, ‘Choir of Hard Knocks’ was the subject of the international award-winning ABC TV series.

Jonathon’s original inspiration came in 2000 when reading an article in the Canadian Reader’s Digest about the Montreal Homeless Men’s Choir whilst in Canada. He then returned to Australia and created Sydney Street Choir in 2001, the first choir of its kind in Australia specifically created for people experiencing homelessness and disadvantage.

Choir of Hard Knocks is credited with being the only artists in Australian music history to have been awarded the highest accolades in the same year. These include a Logie Award for the Most Outstanding Factual Documentary TV Series in 2007 (for the ABC’s ‘Choir of Hard Knocks’ documentary), an ARIA award for Best TV Soundtrack, Platinum ARIA award for their first CD “Songs from the TV Series” a Gold ARIA award for their second CD “Songs of Hope and Inspiration” and a coveted Helpmann Award for Most Outstanding Special Event for their sell out concerts at Sydney Opera House in 2007.

Now in their 11th year, the choir is still led by their dedicated Founding Artistic Director, Dr Jonathon Welch AM and rehearse weekly at Deakin Edge, Federation Square. Most importantly, the ongoing and regular contact the choir provides to the members has had a profound effect on their lives, leading many of the original 52 back to either part time or full-time study or work. The choir has also given members the opportunity to find new purpose in life. Many had become socially excluded due to their socio- economic circumstances, and the choir has enabled them to acquire new skills and rebuild personal confidence and self-esteem.

It has also created long lasting and ongoing friendships and relationships, and a unique opportunity for the choir members to make a positive and enduring contribution back to the community and has inspired a worldwide movement of ‘street choirs’.