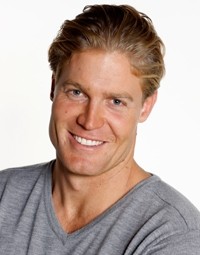 Australians mostly know Chris for his appearances as resident vet on The Today Show and Burke's Backyard, guest presenter on The Project and co-host on The Living Room.

It's probably fitting that a day in the life of Dr Chris Brown begins with a surf at one of Sydney's beaches. The unpredictability of the waves is matched only by the day that lies ahead. For once he swaps the surfboard for the stethoscope, Chris could be tending to anything and everything in the animal world from the smallest of city-slicker pets to the biggest of bovines.

It’s fair to say that Chris’s knowledge of animals is as much instinctive as it is taught. Growing up in the suburbs of Newcastle with his father as the local vet, it’s easy to see why Chris’s four legged brothers and sisters far outnumbered the human variety. The backyard played home to chickens, ducks, koalas, kangaroos, penguins, horses, cows and a donkey as well as the more standard dogs, cats and birds.

After graduating from Sydney University with First Class Honours, Chris took up an offer to work in a clinic on Sydney’s north shore. Yet, despite a busy schedule, he still managed to find time to travel to remote Aboriginal communities in the deserts of the Northern Territory to improve the health of animals that had never seen, let alone been treated by a vet. Despite the extreme temperatures and basic conditions, Chris still regularly visits and conducts research in these areas, drastically improving the health of the animals.

Three years into his veterinary life, Chris was spotted by an agent in a pub telling stories over a few beers. A screen test with Seven Network was the result and two weeks later, Chris began filming as the new vet on “Harry’s Practice”. His impact was immediate, and soon found himself up for a Logie award for “Most Popular New Talent” at the 2004 TV Week Logie Awards. Chris appeared as a presenter on Channel Nine’s Burke’s Backyard program alongside the pioneer of lifestyle television Don Burke, 2004.

Chris released his first book in 2005, “The Family Guide to Pets”, through Murdoch Books. Despite his busy schedule, Chris still practices as a vet and wrote the book to help people make the right decision when choosing a pet and how to have fun doing so.

Chris continues writing for Burke’s Backyard magazine, a regular on Triple M radio’s breakfast show “The Cage” and works extensively in the corporate world most particularly as a corporate ambassador for the well known pet brand "Purina".  He is also co-host of the popular "I'm a Celebrity Get Me Out of Here" show filmed in Africa.