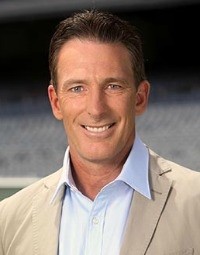 Damien Fleming is a refreshing and entertaining speaker, drawing on his years playing Test Cricket for Australia and working in a strong team environment. During his presentations, he weaves humorous anecdotes together with strong motivational messages which easily translate into business and personal situations.

Today, Damien is a well-known media commentator, hosting cricket programs on Fox Sports, Channel Ten's Logie winning Big Bash coverage and providing commentary stints on ABC radio’s cricket and football programs. He writes columns for the Sunday Age and a regular column for the Inside Edge magazine. He is a coach at the Australian Cricket Academy, a board member and Chairman of Selectors of the Melbourne Stars and a popular figure on the public speaking circuit.

Damien is known as the 'bowlologist' an expert on the subtleties of swing bowling and biomechanics.  The first Australian to take a hat-tick in a test debut in 1994-95 against Pakistan, he went on to play 20 Test Matches for Australia. He is regularly asked about the last over he bowled in the 1999 World Cup Semi Final Tie and the dropped catch by Shane Warne which denied him his second hat-trick.

A right armer renowned for his steadiness and reliability at the bowling crease, Damien was also a key member of Australia's one-day international team, playing 88 matches (including the 1999 World Cup victory) with 134 wickets at an average of 25.38. He will also be remembered for his composed bowling in the final overs of World Cup semi finals in 1996 and 1999 against the West Indies and Pakistan respectively. In 2003, injuries finally took their toll and he retired to take up a coaching role at the Adelaide cricket academy (now the Centre of Excellence in Brisbane).

Damien’s presentations draw on his cricket career experiences - from the great highs of playing in a hugely successful team (who rose to be the dominant team in the world with great preparation, planning and teamwork), to his own self-coaching - from battling to overcoming injuries to be the best player he could, performing under the pressures of international cricket.

He is an entertaining after dinner speaker with his genuine and personable style making him a hit with both male and female audiences alike.