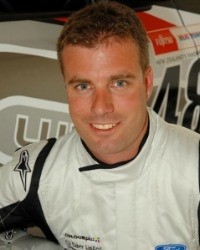 David Besnard finished driving V8 Supercars full time in 2006 and since then has been a much sort after co driver returning to SBR in 2007 to finish second at the Bathurst 1000 with James Courtney.

In 2008 he moved to Garry Rogers Motorsport for two endurance seasons and last year raced at both the L&H 500 at Phillip Island and the Bathurst 1000 for Dick Johnson Racing where Besnard made headlines at Bathurst 2011 surviving a fiery crash at Griffins bend.

David started his motor racing career at the age of eight in Karts. He won two Australian Karting Championships and then left school to pursue his Karting career in Europe and establishing himself amongst the world's best kart racers.

In 1995 Besnard's racing was curtailed by a major racing accident at Sydney's Eastern Creek circuit that saw the talented youngster suffer two broken legs and nerve damage to his left arm.

Despite these major injuries, he was back in action in the Formula Ford races at Bathurst, finishing second in both races driving an outdated car. He returned to international motor racing, competing in the United States based Formula 2000 Championship.

Today David still competes and ranked as one of the top drivers in Australia.