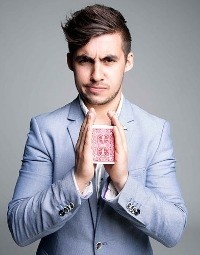 Dom Chambers is an internationally award-winning magician and comedian, known for his modern take on magic, his viral internet videos and artistic live performances. Dom relies on world-class sleight-of-hand, his cheeky wit and a unique ability to connect with all people, in all situations, to win over his audiences.

A master of reading crowds throughout his work, Dom can adapt to suit the needs and tone of any event from private parties to weddings, fulfilling any of a variety of high-profile roles. His award winning comedy magic features at corporate events and dinner engagements throughout Australia. Charming and approachable, Dom’s show is like no other magician’s in Melbourne.

Dom will dazzle your audience and sway even those sceptics present with his unassuming attitude and undeniable skills. It’s the perfect storm of fast, impressive illusion and clever audience engagement which has led to such high recommendation from his past clients and his significant profile in the magic community.