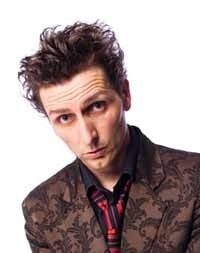 After 20 years in the much loved, Perrier Award-winning duo Lano and Woodley, Frank said Good Bye to being one half of a double act in 2006 with a national tour that took in 34 markets and sold more than 125,000 tickets.

Since hanging up his hat, Frank has been busier than a bee (bees are allegedly flat out). His smash hit solo show Possessed played across Australia and at the Edinburgh Fringe Festival with packed houses and rave reviews. In addition, his animated short, Chicken of God, received an AFI nomination and he won the coveted Herald Angel Award at the Edinburgh Fringe for his role of Candide in the Malthouse Theatre production of Optimism.

Frank was also a regular guest on ABC TV’s music quiz show Spicks and Specks and Network TEN’s Good News Week and an audience favourite on Thank God You're Here.

2012 saw the much anticipated debut of Woodley on ABC TV. Created by, written, produced and starring Frank as the title character opposite the incredible talent of Justine Clarke and newcomer Alexandra Cashmere, Woodley is a romantic comedy filled with virtuosic physical mayhem. It also resulted in Frank receiving and AACTA nomination for Best Performance in a Television Comedy.