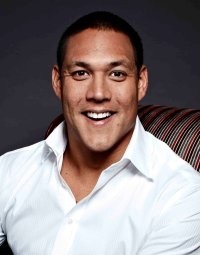 Eight years after he won his last Commonwealth title, Geoff did it all for himself and his country in Delhi 2010. It also came six years after any male Australian swimmer last won an individual Olympic or Commonwealth Games gold medal.

It's statistically true that the man they call Skippy swam the best race of his life in the 100m butterfly final. His time, 51.69sec, was easily the fastest he has ever swum and astonishingly placed him, at 31, second in the world this year behind the greatest swimmer of all time, American Michael Phelps. Four Gold in 2011 and narrowly missed the 2012 London Olympics by less than 1/2 a second.

Today, Geoff is an athlete-entrepreneur and co-director of many companies is positioning himself within the ranks of the business and corporate world, humanitarian ambassadorships, civic-minded projects, and undertaking socially responsible community outreach initiatives.

After weighing in at over 138Kg four years ago, Skippy’s story is that of a true Aussie battler fighting his way back to international, elite level swimming and becoming an inspiring role model in his “comeback” quest. Now he’s rewritten the history books and taken a place in the Australian psyche as a true iconic Australian who battled against the odds and proved triumphant.