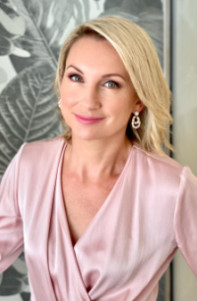 Georgina Lewis has more than 25-years’ experience in the media industry.

After humble beginnings as a news reporter in Queensland's remote North West, Georgina progressed at the age of 23 to co-anchoring Channel Ten's regional news bulletin before making the move to Brisbane in 1999.

After many years in the field reporting on court, police and medical matters, Georgina presented weather for Ten’s five o'clock news hour in Brisbane. She made Australian television history, with the first live broadcast from the top of Brisbane's Story Bridge. After rising through the ranks, she was appointed co-anchor of Ten's News at Five. Georgina was later appointed to the role of solo news presenter.

Georgina is an Ambassador for the PA Research Foundations Project Pink breast cancer awareness campaign, an association she is proud to have shared for more than a decade. She is also an advocate of Cancer Council Queensland, particularly in raising awareness of the importance of skin cancer checks. Georgie is a long-term Brand Ambassador for Audi Centre Brisbane and more recently Brooklyn Beauty Bar.

She is also a familiar face around Brisbane's fashion scene and has been an ambassador for Brisbane's Winter Racing Carnival and sat on the Advisory Panel for the Mercedes Benz Fashion Festival.

A confident and eloquent public speaker, Georgie has emceed a multitude of events during her career. From panel discussions on International Women’s Day, to awards nights for major corporates or government agencies, charity events, festivals or even fashion lunches she’s covered it all.

In 2019 Georgina celebrated 20 years with 10 News First Queensland, before being made redundant in September, 2020.