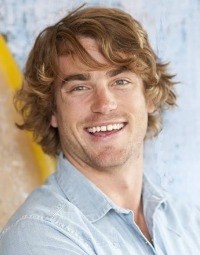 A dash of surf and sand, a pinch of world travel and a hearty serve of home-style fare are essential ingredients in the life of Hayden Quinn. On any given day you might find Hayden hitting the waves, in the kitchen, aboard a plane, in front of the camera, capturing his own experiences behind the lens or simply making the most of the beautiful city he calls home with his mates.

Growing up on Sydney’s Northern Beaches, when Hayden wasn’t out in the water he was lending a hand or running the show in the family kitchen. To this day he says his mum is a huge influence on his love of food, along with Jamie Oliver, Curtis Stone and everyday people who put passion into cooking for their family and the community. To Hayden, “those guys are what food is all about”.

The Manly local loves to start the day with some form of activity and admit he’s not a fan of aprons, which says a lot about his “grassroots” cooking style. Bringing things back to basics, Hayden’s recipes are as much about the experience as they are the ingredients. Hayden’s first publication Dish It Up is all about “healthy food you’ll love to share” (think BBQ Pork with Asian greens or the perfect One-Pot Aussie Pie). Filled to the brim with fresh, tasty easy recipes, Dish It Up is a cookbook for both the kitchen novice and seasoned foodie.

Beach-inspired, accessible cookery is a resounding theme in his eBooks, Hayden Cooks with Friends and Hayden Cooks Summer, as well as his web series 'UNREFINED' – humble video morsels merging Hayden’s favourite places, people and food with adventure and outdoor cooking. Hayden has been a regular face on the Australian media circuit since he first entered our living rooms on series three of MasterChef Australia, and again for MasterChef All-Stars along with Makeover Street, The Dinner Project and more recently Surfing the Menu – Next Generation.

He made his international television debut in 2014 where he filmed a 13 part television series; Hayden Quinn South Africa for South African audiences which covers all things, food, travel, adventure and sustainability. This project is set to air across the Discovery TLC Network through India, South East Asia and China in 2017.

Continuing his career in the media, Hayden has just taken on his biggest role yet as a judge on the brand new food format television show Family Food Fight. Standing alongside Matt Moran, Tom Parker Bowles and Anna Polyviou, Hayden and co. went in search of Australia’s Number One Food Family!

Looking forward, 2018 is looking BIG for Hayden, with lots of great projects underway and many more just around the corner! Right now, the 31-year-old is living the dream (a very demanding dream, he admits) and is ready to lean into the next learning curve, whatever that may be.