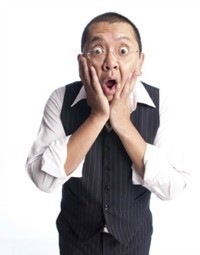 Long before Ahn Do, there was Hung Le.  Hung, the world’s first, best and tallest Vietnamese comic guarantees to spin your mind, dazzle your imagination and awaken your funny zones.

29th April 1975, the last day of the Vietnam war, a nine year old boy jumped onto a leaking prawn trawler on Saigon River with a box of dried biscuits and some seasick pills and managed to survive thirst and hunger to cheat death, to become one of the first Vietnamese boat people to land in Australia – the lucky country, where a young man’s potential is limited only by his imagination. Unless your Hung Le.

“We used to live across the road from the Presidential Palace, which in the 70s in Saigon was a really stupid place to live. They say Vietnam brought the war into people’s living rooms…yeah, you’re telling me, and we didn’t even have a TV.  One side of our front yard was a statue of the Buddha that my father, Le Thanh Nhon, made. He was Vietnam’s most famous artist. At the end of the war, the communists smashed all his work but they didn’t touch his Buddha because there’s an old Buddhist saying; KARMA SUITS YA".

Defying the stereotype, Hung wasn’t a math or computer whizz and had no doctoring or lawyering abilities. What he was blessed with was funny bones. From busking in the streets to winning Red Faces on Hey Hey It’s Saturday, he managed to make an international career playing the violin out of tune.

The Crappiest Refugee is an hilarious and endearing memoir about a boat person who never found his land legs, but has always seen the funny side.