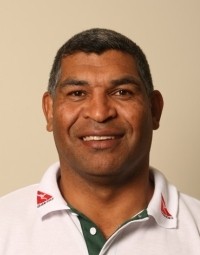 Former young rugby union player Jim Williams is all geared up to make a difference off the field following his appointment by NSW Rugby Union to encourage and support young Indigenous Australians through the Government’s Learn, Earn, Legend! program. Learn, Earn, Legend!, administered and funded by the Department of Education, Employment and Workplace Relations (DEEWR), encourages and supports young Indigenous Australians to stay at school, get that job and be a legend for themselves, their family and their community.

As a successful rugby player and businessman, Jim has long been a mentor to many young players. He has already helped support many young Indigenous Australians from pre-school through to tertiary education through his involvement with the A Start in Life foundation’s Barinya program. “I’ve always wanted to help out,” said Jim. “Now the time is right for me and I believe this is a great opportunity to help younger Indigenous Australians become successful in whatever they choose to do in life.”

Jimmy was born in Young in 1968 and grew up playing rugby league. It wasn’t until he joined the army at the age of 16 that he began to play rugby union. He played club rugby for Young Rugby Football Club before moving to Brisbane where he played for West Brisbane. He began his state career with the NSW Waratahs before moving to the ACT Brumbies for the 1998 Super 12 season. He represented the Irish province Munster between 2001 and 2005 and earned 14 caps for the Wallabies between 1999 and 2000, including Rugby World Cup, Super 12 and Heineken (European) Cup wins.

Jim was appointed assistant coach in Munster (winning the 2007 -2008 European Cup Title) and returned to Australia in 2008 when he was offered an assistant coach role with the national side, The Wallabies, under coach Robbie Deans. Jim is now the Project Coordinator (DEEWR), based at the New South Wales Rugby Union offices in Sydney.