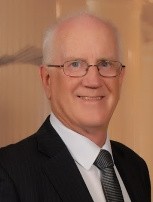 John’s a husband, a dad, and a grandfather. He’s also in the unenviable position where he can speak with authority on a fatal car crash in which he was involved. John received life-threatening injuries after an 18-year-old girl who fell asleep at the wheel of her four-wheel-drive, crashed into John’s stationary car, and tragically she was killed.

At the time of the car crash, John was married with four daughters, he was a successful businessman and had a significant mortgage, leased cars, education commitments etc. etc.

Four months after the car crash his employment was terminated because of the extent of his injuries, and soon after that, doctors would tell him that he would never work again. By this time, John was already receiving his Income Protection benefits, the regular fortnightly payment that would become his family’s financial lifeblood for the next 16 years.

Incredibly, more tragedy was to come. Just 30 months after John’s car crash, he and his family were dealt the cruelest of blows when Carmen (age 18), the youngest of their four daughters, was killed in a car crash, another victim of fatigue.

John takes you on his journey where fatigue is the villain, he tells how it is the silent and sinister killer on our roads. Fatigue cost two 18-year-old girls their lives, and it could have destroyed his family.

John’s true-life story is one of triumph over tragedy, and he speaks about the strength and love of his family. As an International Keynote Speaker, he inspires people to appreciate their loved ones and to understand the importance of their own life and the true value of family.

John is the go-to keynote speaker for corporate and Secondary Schools, where his message clearly establishes the need for everyone to take responsibility for their actions as a road user.

John is a unique Australian, and his story motivates and inspires as it touches the hearts of everyone. There is laughter and there are some tears, but importantly he brings hope! This truly is a presentation that you will never forget.