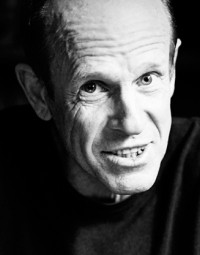 Jon Doust will tell you he's a big name in Western Australia. Well, his name isn't that big, with only eight letters to it, but as soon as he hits a presentation floor, things around him diminish. That, and his overactive sense of humour and the ridiculous, is why he is in demand.

Jon comes from an old WA family, steeped in the stories he's gathered along the way and those handed down to him by his story telling grandfather, Roy Doust.

His first adult novel, Boy on a Wire (Fremantle Press) required a re-print within 9 months and was then long-listed for the 2010 Miles Franklin, Australia's most prestigious literary award, along with such notable Australian writers as Thomas Kenneally, Craig Silvey, Alex Miller, Sonya Hartnet, Peter Carey and the eventual winner, Peter Temple.

Since then Jon has been in demand at literary festivals, schools, book clubs, libraries, bus stops and coffee shops.

He is a regular on the conference circuit, speaking on a wide range of subjects, from Jungian personality models, the value of humour as a stress reliever, to leadership and community development.

Jon has learnt that his broad range of skills are ideally suited to the development of, and engagement in, community projects. His broad range of abilities might see him facilitate a public think-tank, engage with committees in the process of creating a public event or festival, marketing and promoting the event/festival, and, finally, stacking chairs, placing tables, clearing rubbish and MCing performances during the public event/festival.

Jon has been responsible for starting a range of organisations and events. These include one of Australia's longest running comedy rooms, Perth's Laugh Resort; the Australasian Cherry Pip Spitting Championship and the Manjimup Cherry Harmony Festival; Albany's Sock Fence; and was one of the founding members of the WA branch of the Wilderness Society.

He has had diverse careers. He was born in Bridgetown into a farming/retailing family and worked in both until he was old enough to know better. Since then he has been asked to leave jobs in banking, the media, retailing (again), farming (again) and comedy.

He has also written a political satire - How to lose an election - based on his own losing experiences and co-written two children's books - Magpie Mischief and Magwheel Madness. Both have almost received awards.

Jon has a BA English (Curtin University), is a member of the Jungian Society, the Australian Association for Psychological Type, Laugh Resort Inc, an association of stand-up comedians, Creative Albany, a creative community think tank based in WA's first town and port, the Australian Society of Authors, the Wilderness Society, and the International Society for Humour Studies.

Jon is often addressing groups at the Curtin Business School's Centre for Entrepreneurship, talking about personality differences and the benefits of diversity for team strength and resilience. He is an accredited practitioner and qualified to deliver four psychological models based on the work of Swiss psychiatrist Carl Jung.