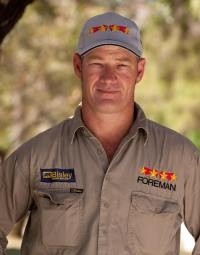 A talented and skilled carpenter, builder and foreman, Keith Schleiger is also a popular television personality – best known as ‘The Blockinator’ for his role on Nine Network’s hugely successful series, The Block. Keith is available for guest appearances, meet and greets, sportsman's panels and DIY demonstrations.

Keith joined The Block as the on-site foreman in the 2011 series and quickly became an audience favourite. His extensive building knowledge, easy going nature, and instinctive attention to detail proved key to keeping one step ahead of the contestants. With a firm, fair and friendly leadership style, he was able to gain the respect and trust of both the contestants and audience.

A true man’s man, Keith’s passions in life are sport and building. Growing up in Melbourne, he started his career in sport at the age of 15, representing Victoria in the Under 16 schoolboys’ AFL team and playing Under 19’s for North Melbourne. Keith also played district cricket for North Melbourne as opening bowler over four successful years, often bowling to past, present and future Test players.

At age 17, Keith began an apprenticeship as a carpenter alongside his sporting commitments. When his sporting days were over, Keith was a fully qualified ‘chippie’ and began to build himself a successful career in the industry. At age 21, he had already built an entire primary school, and his drive for knowledge and success soon saw him become a highly respected builder in the industry. Over his 26 year career, Keith has been responsible for many of Victoria’s best buildings, overseeing the construction of everything from entire hotels to Toorak mansions.

Alongside his role with The Block, Keith is currently building his own home for his young family. He is also associated with the National Skills Academy whereby he provides assessment and training services to deepen workforce skills in building and carpentry.  His role gives workers an opportunity to experience personal  growth and life long learning through study and hands on experiences.

A perfect ambassador for his trade, Keith has excellent communication skills and is admired amongst his peers for being ethical, energetic and a positive role model for both young and old.