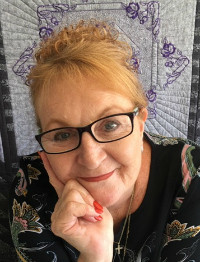 Kym was born and lives on the Gold Coast, Australia and is an international speaker, teacher, author, co-inventor of sewing related products and co-owner and CEO of The Sewing Revolution Pty Ltd.

Kym has a Bachelor of Science Degree with a double major. (Biochemistry and Reproductive Physiology) conferred from Griffith University in 1982, but attended both University of Queensland and Griffith.

She entered the Queensland Police Force in August 1982.

Retired from the Queensland Police Service in 1995.

Awarded a Commendation for bravery in the line of duty in 1984.

Admin for a group of former and serving Police who suffer PTSD.

Kym is now an international speaker and has presented and taught extensively in Australia, New Zealand, Thailand and the United States of America.

She speaks about the chapters we experience in our life, some expected, some not, but looks for the lesson in each one.

Kym has appeared in many magazines both as contributors and had profiles done on herself and her work.  She is a ruler designer for Creative Grid USA and proud to be part of that family.  She has been invited to present and teach for most of the major Sewing Machine manufacturers.  Kym also regularly does speaking tours for Janome America, and was the special guest at a Sewing Convention in Las Vegas, and also invited to be the keynote speaker at Sew Expo in Puyallup Washington.