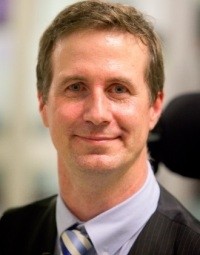 Matthew Ames was 39 years old when what started as a sore throat resulted in the loss of all four of his limbs. He had contracted a streptococcal infection resulting in toxic shock and was never expected to survive. Matthew suffered kidney failure, a detached retina, and permanent hearing loss in addition to the loss of his arms and legs. He was in a coma for three weeks, and spent almost two months in intensive care.

Matthew came home in the first half of 2013, and is a continuing outpatient at the Mater Private Rehabilitation Centre in Brisbane. Now years later, Matthew has beaten the odds, spurred on by the fact that he is the father of four young children, and husband of a very dedicated wife determined to grow old with him.

Matthew has made a recovery that has amazed everyone who has shared his journey, powered by a positive attitude and focus on what he can do, rather than what he can't. He has started to share his stories with others in the hope that it inspires self-reflection, motivation to be positive about circumstances that arise, and new attitudes toward disability. His family's story has been captured in his book, 'Will to Live'.

Matthew has been a Queensland state finalist in the 2013 Australian Father of the Year awards, and the recipient of the 2013 Queensland Pride of Australia (Courage) Award.

Matthew has recently completed a series of surgeries associated with a procedure called osseointegration that will enable prosthetics to directly attach to his bones. He will be the first person in the world to have this done on all four limbs. Much of Matthew’s time is currently spent focusing on rehabilitation.

Prior to his illness, Matthew was an executive in the energy and resources sector, an industry in which he had worked for almost 20 years as an environmental engineer and safety professional. His most recent position was as Group Manager, Health Safety & Environment at Origin Energy.

Matthew is a true inspiration. His story could be a tragedy but Matthew tells it in a way that makes you realise every day is a gift. He is a talented storyteller and instead of making you cry with the enormity of his tale, you laugh with tears of joy as he recalls almost losing his shorts in the grade 2 classroom. The standing ovation of our 300 guests showed that everyone in the room was lifted by his courage, determination and commitment to family. Thank you Matthew and if there is one thing we all took away, it’s look at what you can do, instead of what you can’t.

We engaged Matthew Ames to speak at the 'go live1 celebration as Matthew's journey not only spoke to overcoming challenges, but highlighted the importance of personal resilience and resourcefulness. The audience was captivated and motivated by Matthew's speech. His story of striving to make a difference is inspirational and Matthew delivers his story with great warmth, humility and humour. Matthew gave us so much more than we expected and helped mark our celebration as a truly memorable event that people still talk about in very glowing terms. I am so grateful that Matthew gave us his time to come and speak to us and answer our questions. I would recommend Matthew as a positive motivating speaker to any organisation or group dealing with change ...just listen to Matthew and you have cause to reflect that your challenges are not really as great as you thought and that ingenuity, a strong will and determination to succeed and having a committed supportive environment will help you achieve your goals.