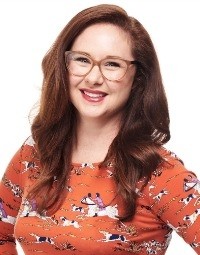 Mel Buttle is a hilarious bundle of contradictions, and she’s a package that is rapidly making herself felt in all mediums, right across the country.

Since her first solo show in 2010 which scored her a nomination for Best Newcomer at the Melbourne International Comedy Festival, Mel has been performing on the live comedy circuit across the country going from strength to strength including in 2019, touring her brand-new comedy show, Welcome Aboard.

As well as live performance, Mel is a sought-after writer with a weekly column in The Courier Mail, having written for ABC’s Ronny Cheing International Student, The Drum, ABC3’s You’re Skitting Me, Please Like Me, and being a full-time writer on Network Ten’s This Week Live.

You may have seen Mel on ABC TV’s The Weekly with Charlie Pickering, Tractor Monkeys, Back Seat Drivers or It’s A Date as well as Network Ten’s The Project, This Week Live, Hughesy We Have a Problem and NZ’s TV3 weekly program 7Days.

In 2015, Mel found out she can have her cake and eat it too, scoring the job of co-host on The Great Australian Bake Off for Foxtel’s Lifestyle channel alongside her friend Claire Hooper and judges Maggie Beer and Matt Moran. The fourth season of Bake Off aired in 2019.

Mel performed her new Solo Show Hands on Heads at the Brisbane Powerhouse and a recording of that show has since been released and is available to download as a podcast by ABC Comedy Presents.

Buttle has the right mix of confidence and vulnerability to get the audience on side and the material to keep them there … there is something about Buttle that brings a young Judith Lucy to mind. It would come as no surprise if she was just as successful.

With the confidence, presence and sarcasm of a young Kitty Flanagan, Buttle had the audience eating out of her hand with some hilariously wrong stories…