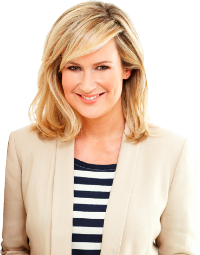 Melissa is a journalist, author and television presenter, best known to many as the co-host of Australia’s leading breakfast television program, SUNRISE. She has worked as a journalist in the electronic media for over 18 years and has hosted many successful programs and specials throughout her career.

In 2008 and 2009 Melissa hosted The Zoo - a documentary program profiling the activities in some of Australia’s biggest zoos. The program was a critical and ratings success and it brought many heart-warming stories to Australian lounge rooms. Melissa has been a weekly newspaper columnist for the Sunday Herald Sun newspaper, co-hosted Australia’s favourite nostalgia program WHERE ARE THEY NOW? and has been nominated three times for a Silver Logie (2006, 2007 and 2008) for Australia’s Most Popular TV Presenter. She actively supports many children’s charities and in 2009 won The Gold Harold Award for her work with those charities.

Melissa began her career as a news cadet at WIN Television in Canberra and progressed through the news presenting ranks from Weather Presenter to 6PM News Presenter at Prime Television as well as continuing her duties as an on the road reporter. She also spent some time on breakfast radio in Canberra. In 1996 she started with the Seven Network and after a posting as Federal Political Reporter at Parliament House she returned to Sydney and has hosted and/or read the news on several Seven Network programs including a previous incarnation of Sunrise, 11AM, Ansett In Flight News, Sydney Weekender and Today Tonight. Mel graduated from Charles Sturt University in Bathurst with a Degree in Communications and Broadcast Journalism.

In 2007, Melissa published The Working Mothers Survival Guide - a definitive handbook for any woman looking to juggle the balance between having a family and continuing her career. The book covers a broad range of topics including from pre-planning, to negotiating maternity leave, childcare options, the law and budgeting. As the book says it's “for all us mums out there, in paid or unpaid work, juggling a family and trying to smile through it all.”

Today Mel reads afternoon news on Ch7, and is a guest reporter on special projects.