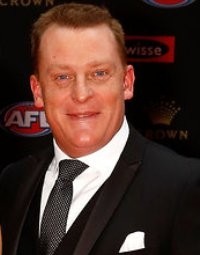 Michael Voss will go down in history as one of the great players of not only his generation, but of several generations. Indeed, Lions coach Leigh Matthews has said there had not been a better midfielder in the game in the last 30 years. That is the highest praise possible from a man voted as the Player of the Century and one who has coached two of the most significant premiership teams in the same period. Michael was a 10 year club captain, posting 209 games.

His comprehensive knowledge and experience of how to build a winning team, create sustainable success and develop a leadership mindset provides that crucial edge to corporate retreats, conferences, team building events and staff meetings. For those committed to discovering their full potential as a leader, Michael Voss also provides group and one on one executive leadership coaching.

Fourth in line after AFL greats Stephen Kernahan, Ted Whitten and triple Brownlow Medallist Dick Reynolds. The years 2001, 2002 and 2003 were the icing on the cake of superstar Voss' already stellar career. He was now a triple premiership captain, and roundly acknowledged as the best player in the game at present.

Voss was also voted Herald Sun Footballer of the Year. A modest, level–headed young man with enormous regard for the history and tradition of football, he is highly respected by his team mates for his work ethic and is the ultimate utility player. Michael Voss is one of the game's more marketable figures and he is highly regarded by all media representatives as an ever–helpful and interesting media 'talent'.

Michael also worked as an expert commentator and sports newsreader with Channel 10, then he jumped into the next phase of his career in September 2008 when appointed coach of the Brisbane Lions from 2009 to 2013.  2014 saw Michael host and also coach in a reality TV show on Fox called The Recruit where one talented contestant won entry into an AFL career.