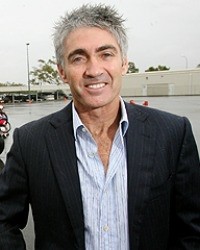 Mick Doohan began riding motorcycles in 1974 at the age of nine. His first major career breakthrough was in 1987 where he had an impressive record of 26 wins from 57 starts.

Doohan then joined Rothmans Honda for his debut year in the 500cc world championship. His team-mates were world champions Wayne Gardner and Eddie Lawson of the United States.

Doohan travelled all over the world racing and he established himself among the all-time greats of 500cc racing in 1997 when he won the world championship for the fourth successive year.

In 1998 Mick clinched his fifth successive 500cc world championship title by winning the Australian Grand Prix at Phillip Island. He won eight grand prix races during the year, which boosted his career tally of 500cc victories to 54 from 135 starts since 1989.

He joined Agostini and the late Mike Hailwood of Great Britain as the only riders to win four consecutive 500cc titles. During his successful career he has recovered from numerous injuries and operations.

After retiring from riding, he still maintains a strong involvement in grand prix racing.