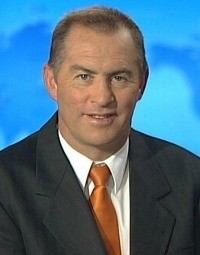 Paul Wade or 'Wadey' as he is known around the world had a remarkable international career, including the 1988 Olympic Games, the 1990 and 1994 World Cup campaigns and one of the toughest tasks in world football to 'mark Diego Maradona' (probably the best player in the world at that time) in the 1993 World Cup play off with Argentina.

In a career with over 100 appearances for his country, Paul Wade also won two National Soccer League championships and was voted NSL player of the year in 1988. No less than 46 of his 84 first class international matches were as captain of the Socceroos. Born in Cheshire, England in 1962, Paul came to Australia in 1973 at the age of 11. Paul made his NSL debut in 1984 for Green Gully in Victoria & won the 1985 NSL Championship with Brunswick Juventus. Eight years later & another NSL Championship with South Melbourne, Paul finished career with Canberra Cosmos the most capped Socceroo of all time.

Of the thousands of fans who turned out to farewell this Australian soccer legend in his final match, there was one thing none of them knew. That Paul has epilepsy. Paul Wade didn't know it either, even though he had epilepsy since childhood. "Would I have ended up representing my country in all those matches, if I knew I had epilepsy? I just don't know...everybody responds to epilepsy differently... some people let it change the whole way they see themselves and what they can do."

"To deal with epilepsy well, you need the right attitude and you can't do it alone ... you need teamwork."

Paul Wade's passion for the game carried on after his retirement to both extensive work in the media as an expert TV presenter and in a variety of junior development roles.

Wadey now takes great pride in consulting to Sports Education Group (SEG) to develop the country’s leading soccer development programs "Headstart", the flagship advanced development program of the Paul Wade National Soccer Schools. Paul aims to help kids experience the joy of "playing like a socceroo legend". Paul Wade worked with Channel Nine and Sportal for their coverage of the 2006 World Cup in Germany. In 2010 Wade provided commentary for the Age newspaper of Melbourne in the lead up to the 2010 World Cup. Paul Wade is a highly entertaining speaker who can also incorporate some very strong business and motivational messages.

Born in Cheshire, England in 1962, Paul Wade came to Australia in 1973 at the age of 11. He made his NSL debut in 1984 for Green Gully in Victoria and the following year went on to win the NSL Championship with Brunswick Juventus. After moving to South Melbourne, for whom he played for 8 years and won another NSL championship, he finished his career with the Canberra Cosmos.

As well as his illustrious club career, Paul Wade was one of Australia's greatest and longest serving Socceroos. In an international career spanning 10 years, in which he was captain for a large part, he won 118 caps for Australia.

It is without any reservations that I provide this testimonial for Paul Wade. His contribution to a recent AMP conference was first class and his ability to combine his experience as an international footballer and national team captain with a strong learning environment was a big winner with our delegates. I find Paul extremely good to work with and his demeanour and passion certainly show through in his presentation. I am happy to recommend him for any company or group who is looking to encourage their employees or team members to excel at what they do.

Paul Wade is a truly inspirational and motivational speaker. Using his unique experiences as Socceroo Captain he was able to translate the core values of our organisation to the senior executives in a humorous yet poignant way.

Paul speaks from the heart of his dreams, measured by meaningful and poignant life experiences, imbued with passion and humour, with an insightfulness that sits well with those who also dream and aspire to be the best they can be.