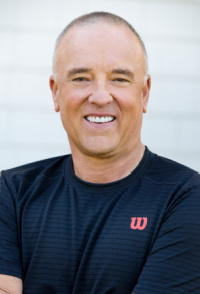 Sports Illustrated has named Roger Crawford as "One of the most accomplished physically challenged athletes in the world." In recognition of his extraordinary athletic achievements, he was given the prestigious ITA Achievement Award, presented by the International Tennis Hall of Fame.

After realizing tremendous success on Center Court as a Division 1 athlete, he took his talents to Center Stage and became a motivational speaker. Roger's transformational message gives organizations the ability to decrease excuses, increase results, and breakthrough self-imposed limitations. His remarkable life story is a powerful example that "challenges are inevitable, defeat is optional!" He is the host of the weekly feature Motivational Mondays with Roger Crawford, which can be seen worldwide on Tennis Channel.

Roger has been inducted into the National Speakers Association Hall of Fame in recognition of his professional success. As a member of the Hall of Fame for People with Disabilities, he shares this impressive distinction with fellow honorees such as Christopher Reeve, Helen Keller, and former President Franklin Delano Roosevelt.

You may have seen Roger Crawford interviewed on CNBC, Good Morning America, Monday Night Football, The Today Show, and many other prominent television programs.

The print media has profiled Roger in publications such as The Wall Street Journal, USA Today, Men's Fitness, Fast Company, and Tennis Magazine.

Roger is also a bestselling author whose books have been translated into 17 different languages. His most recent book, Think Again! Discover the Possibilities Hidden in Plain Sight, helps readers embrace change, improve their mindset and achieve breakthrough performances.