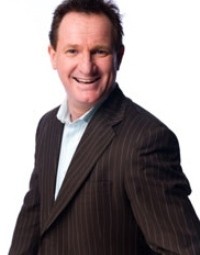 As a youngster, Russell was fanatical about two things - footy and comedy. When he wasn't playing junior football he was listening to his collection of comedy records. He performed his first stand-up routine in his early twenties at a party in his mate's backyard and he was so delighted by the response that he decided to enter a talent contest at his local football club, and won. What followed is a career in comedy.

Russell performed stand-up comedy on "Hey Hey It's Saturday". He joined the team and created the popular "Celebrity Heads" segment. His impromptu interruptions from the audience, live crosses & sketch comedy segments became an integral part of the program. He starred in “The Comedy Company” and his own show "The Russell Gilbert Show”, hosted his weekly, national television series, "Russell Gilbert Live", and comedy show, "Gilbert Was Here”. He was awarded a Logie nomination for Best Comedy Performer.

Russell delights audiences alike with his special blend of comedy while performing Master of Ceremonies roles.