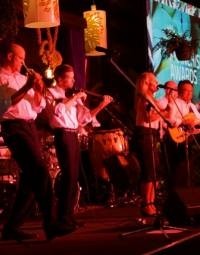 You can catch Russell fronting one of Australia's most versatile cover bands "Tectonic" or unplugged with his guitar performing his own compositions, but he is most renowned in Northern Australia as a vibrant solo entertainer covering almost any vocal style. Whether at a special event, wedding or function, Russell's professionalism and dedication to the show shines through.

Russell's career spans 20 years as a professional musician, songwriter and performer. He has completed 2 solo albums of original material entitled "Simple Life" and "Survivor" and has been main artist on the "Naked Melody" album (Australian Sun Records) which features the Flugelhorn. He has played on many other Australian artist's albums/recordings including renowned indigenous performer "David Hudson", Songwriter "Andy Collins", Aria winner "Seaman Dan", "Drewz" and "Tribe of Jubal" albums. Live bands he has formed or played in include "State Of Mind", "Russell Harris Band", "Hip Fidelity" and "Tectonic Big Band".