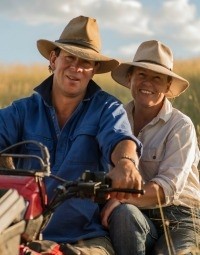 Sam Bailey suffered a spinal injury in a car accident while jackerooing in the Northern Territory at 19-years-of-age, leaving him a C6/C7 quadriplegic. He is paralysed from the chest down with only limited use of his arms and hands and can’t regulate his body temperature. He has lost bowel and bladder control and part of his lung capacity. He has overcome all those challenges to become a farmer, ultralight pilot, public speaker and best-selling author of the book Head Over Heels which he co-wrote with his wife, former ABC Rural Reporter, Jenny Black.

Sam Bailey is a farmer, pilot, husband and best-selling author. He has achieved all of those from a wheelchair….and has an incredible ability to take an audience on the journey of his life.

From a childhood growing up in the Australian bush to a car accident in the outback that turned his life upside down and its aftermath, Sam tells his story in his own down-to-earth laconic style that captures the great Australian spirit of ‘having a go’.

He relates how he beat the odds to fulfil his life-long dream to be a farmer, learning to ride a four-wheel bike; devising a hoist to get into farm machinery and ultimately learning to fly an ultralight.

Sam then found his soul mate in former Tamworth-based ABC radio Rural Reporter, Jenny Black – who he proposed to “live” on regional radio. The real-life proposal jammed the phone lines and the fax ran out of paper.

Their story appeared on ABC TV’s “Australian Story” in 2000 with an overwhelming response and was published in April 2006 in their book ‘Head Over Heels’.

Today they live and work together on their beef cattle property in North West NSW, in between travelling the country telling their story and giving inspiration to others.

They are also working towards their next big goal – Sam becoming the first quadriplegic in the world to fly a helicopter and flying into schools to inspire children to fulfil their own dreams and goals.

The project, called Helifirst, will be launched during 2018.