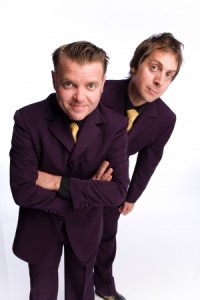 The Scared Weird Little Guys are one of the worlds most successful and sought after entertainment duos. They have received numerous awards in many countries for their unique blend of music and comedy, honed over the course of over 4000 performances. They are accomplished musicians, comedians, composers and entertainers, working professionally for over 25 years.

Since forming in 1990 the Scaredies have toured extensively throughout the world, delighting audiences in Canada, the US, UK, Asia, New Zealand and their native Australia. They have released seven CDs and one DVD, won an ARIA award for Best Comedy Release; performed shows with Symphony Orchestras, Rock Bands and Brass Bands; appeared at Folk festivals, Comedy festivals, Street festivals and Fringe festivals; and written and performed shows for Arts Councils, Planetariums, Awards nights and countless corporate functions.