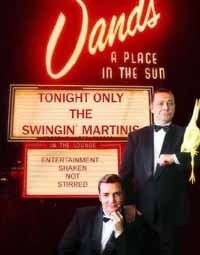 The Swingin’ Martinis, formally known as Johnny and Vinny, have worked together in various guises for nearly 20 years and it shows! They share the same dress sense (nothing less than a tuxedo) and from the very second they enter the room, there is an energy and expertise to their show that is staggering.

They swing their way through an array of classic tunes that have the audience singing (and dancing) along at a cracking pace! But make no mistake, this show is not just about a couple of guys who can sing well, it is also a classic comedy double act that has elements of voluntary and contagious audience participation. And whether the boys are performing to an audience of 15 or 1500 their humour and enthusiasm is universal and seems to bring everyone out of their shell.

The Swingin’ Martinis have entertained many audiences from across Australia and throughout New Zealand, Fiji, and Hong Kong. They have also performed for many major clients including Mercedes Benz, Microsoft, Toshiba, Caltex, Qantas, AMP, Toyota, McDonalds and Arnott’s to name a few.

They have also had the honour of performing to high profiled political leaders throughout Australia as well as celebrities such as Sir Richard Branson. The songs range from Frank Sinatra and Dean Martin classics through to the Proclaimers via ABBA and Tom Jones.

All these are fused together in a tight 40/45 minute show. As the expression goes…”There’s something for everyone!” With a show that is high energy, musically entertaining, interactive and a whole lot of fun, many clients have felt the urge to say “Dean and Jerry live again!”

So go on, if you’re looking to give your function or event that extra ‘swing’ there is really only one choice, ladies and gentlemen – ‘The Swingin’ Martinis’!

Your show really made the night.

You guys were great! It was a shame to see you leave the stage.

That was great, well done boys!