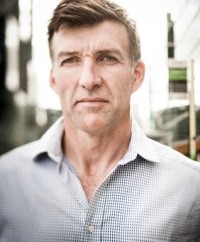 Tim Jarvis AM is an environmental scientist, author, adventurer and public speaker with Masters degrees in environmental science and environmental law. He is committed to finding pragmatic solutions to major environmental issues related to climate change and biodiversity loss. He uses his public speaking engagements, films and books about his expeditions/work to progress thinking in these areas. A Senior Associate of global engineering firm, Tim is also sustainability adviser to leading organisations within the Australian insurance and housing management industries as well as on multilateral aid projects in developing countries. He is brand ambassador for outdoor gear company Kathmandu.

Tim has undertaken unsupported expeditions to the world’s most remote regions, and has a long history of working with sponsors and the media. Expeditions include to the South Pole, the high Arctic, across Australia’s largest desert, the Great Victoria and retracing the polar journey of Sir Douglas Mawson using only the same gear, equipment and starvation rations as Mawson did in 1913. The documentary - Mawson Life and Death in Antarctica was flagship of the Film Australia ‘Making History’ series, and fronted Channel 4’s highly acclaimed ‘Edge of Endurance’ series in 2007. Expedition patrons were Australian Prime Minister the Hon John Howard and Sir Ernest Shackleton’s grand-daughter the Hon Alexandra Shackleton.

In 2013, Tim led the first authentic retracing of polar explorer Sir Ernest Shackleton’s “double” - sailing a replica James Caird boat 1500kms across the Southern Ocean from Elephant Island, Antarctica to South Georgia and climbing over South Georgia’s mountainous interior using the same rudimentary equipment, period clothing and technology as Shackleton. Regarded by many as the greatest survival journey of all time, this is the first time since Shackleton that anybody has been able to authentically recreate it. A Discovery Channel/PBS documentary film and best-selling Harper Collins Book Shackleton’s Epic: Recreating the World’s Greatest Journey of Survival have been made about the expedition.

After over two decades of polar travel and work as an environmental scientist, Tim is a well-known public speaker, applying the lessons he has learned throughout his various expeditions to talk about leadership, problem solving, teamwork, change management and goal setting in an organisational context.

In addition to Shackleton’s Epic, Tim’s books include The Unforgiving Minute (Random House) and Mawson: Life and Death in Antarctica (MUP), released in conjunction with his international documentary film of the same name and officially endorsed by the United Nations Environment Programme in 2009. He is co-author of the academic book The Frozen Planet (Open University, UK) jointly released with Sir David Attenborough’s BBC TV series.

Tim holds the record for the fastest unsupported journey to the South Pole and was awarded the Australian Geographic Society’s ‘Spirit of Adventure’ medal for his kayak journey across Australia’s largest salt lake, Lake Eyre in 2004. He was voted the Australian Adventurer of the Year in 2013 and Conservationist of the Year in 2016 (Australian Geographic Society) – the only person ever to receive both prestigious awards.

Tim was conferred a Member of the Order of Australia (AM) for services to environment, community and exploration in the 2010 Australian honours list and was made a Fellow of the Yale World Fellows Program 2009 for his international leadership in the field of environmental sustainability. He received the Sydney Institute of Marine Science’s Emerald award 2013 for services to the environment and the Royal Institute of Navigation’s Certificate of Achievement as Expedition Leader of the Shackleton Epic Expedition, and was voted Classic Boat Magazine’s Person of the Year 2014. Tim is head of the adventure advisory panel of the Australian Geographic Society and sits on the Society’s advisory board, and is the current explorer in residence at the Australian Museum. In November 2014 Tim was made Global Ambassador to international sustainability NGO WWF. Other recent positions include 4 years as Patron of Nature Play SA (established to increase the time children spend in unstructured play in nature to improve fitness, problem solving ability, and emotional resilience) and 5 years on the board of Zoos SA, Australia’s leading conservation-focused zoo.

Tim received the prestigious Bettison James award 2016 for documentary film-making for his current project, 25Zero that highlights climate change through the plight of the world’s melting equatorial glaciers. In 2017 he was inducted into the Bragg Membership of the Royal Institution of Australia with the highest category of membership awarded by the Institution, recognizing excellence in scientific achievement and commitment to science communication.

Tim is outstanding; he captivated the audience with his inspirational advice on leadership under adversity and pragmatic optimism. Thanks, Tim Jarvis!

Tim Jarvis has spoken to Fujitsu staff on a couple of occasions, the first to a large group of 200+ people managers and the second to a smaller group of sales high achievers. On both occasions, the audiences were captivated by Tim’s story and totally engaged. They have been motivated to take the preparation and teamwork lessons Tim provides back to use within their own teams and customer engagements. We very much value Tim’s great relationship with Fujitsu.

We will be looking for opportunities to work with Tim again in the future. A truly inspiring story which our team will not easily forget!