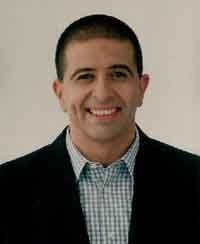 Vince Sorrenti is one of Australia’s best known comic entertainers.

After graduating as an Architect in 1985 he threw full weight behind his real talent and has performed to ecstatic crowds on thousands of stages all over the world.

Five time winner of the Mo Award for Australia's Best Stand Up Comic, Vince has hosted TV programmes in Australia and the United States, appeared in movies, been a contestant on Celebrity Apprentice, released comedy albums, performed in festivals, and so much more.

He has demonstrated his versatility over the years being everything from a sports commentator for the Rugby World Cup on the Seven Network to a debating captain on shows like Good News Week. This has been the key to his popularity on live stages at a blinding array of events.

Vince has facilitated major conferences for Australian and multinational companies. He presented scores of awards, paid tribute to Bob Hawke, debated with Richard Butler, entertained a delegation from the U.S. Defence Alliance and launched everything from footy club seasons to Frank Sartor's state political career. Vince also lends himself to a large number of charity organisations.