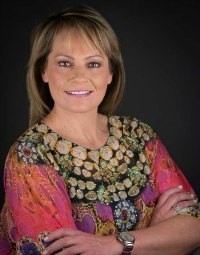 After completing her studies, she assumed her career in 1992 in National Government at the Department of State Expenditure. In May 1994 Nelson Mandela became the first democratically elected President of South Africa. Zelda joined his office in October 1994 despite her conservative beliefs. In 1997 she was promoted to become one of the President’s three Private Secretaries.

In 1999, President Mandela could choose one person from his office to serve him in retirement and he hand-picked her.

Together with Professor Jakes Gerwel, Zelda was the only other founding staff member of the post-Presidential Office of Mr Nelson Mandela from where the Nelson Mandela Foundation was established. Zelda served President Mandela in various capacities over 19 years managing his office, personal needs, media and public relations and was the person who spent most time with him other than his wife, Mrs Graca Machel. Together they travelled the world and became co-dependants. She describes him as her grandfather and he always jokingly referred to her as his “boss”.

She has been awarded by a number of organisations for her dedication and service to the late Nelson Mandela; most notably named a Frederik van Zyl Slabbert fellow as well as a Paul Harris fellow, the highest honour to be bestowed on individuals by Rotary International. She does work for several charitable organisations and continues to contribute to social cohesion.

She has presented herself on the international speaking circuit since 2010 and continues to inspire people through sharing her life experiences. Zelda has opened several local and international conferences or presented as keynote. In 2015 she was invited to speak at Campfire 2015, an exclusive annual private weekend hosted by Jeff Bezos, Amazon. In 2017 she addressed the Council of State in the Netherlands, the highest body of state advising government and the Royal family in the Netherlands. In 2018 her highlights on the speaking circuit included presenting at the Bill Clinton Foundation in Arkansas and delivering the 5th annual Nelson Mandela lecture at the University of Gent in Belgium.

Her speeches are tailor made for any audience while her message around authentic ethical leadership is key to her experiences with Nelson Mandela. She inspires through storytelling and shares some of the most private and public moments during her time at the side of the international statesman. The themes of her talk include but are not limited to: personal transformation to becoming an honorary granddaughter to Nelson Mandela; discipline; respect, ethics, integrity and how to become a change agent like Nelson Mandela.

In 2014 Zelda published her memoirs in the international best seller entitled “Good Morning, Mr Mandela”. New York based Maven Pictures’ Trudie Styler, Celine Rattray and Jacqui Lewis obtained the rights of the book for adaptation into film. The movie will be released in 2021.

Zelda is a weekly co-host on a National TV talk show in South Africa and in 2019 co-produced a documentary on the people and places that shaped Nelson Mandela. She also contributed as guest curator to an international exhibition on the life and times of Nelson Mandela that tours internationally until 2023.

Zelda tells a moving story about where she had come from and how Mandela opened her eyes to a history of her own country and upbringing that she had been blind to. With humour and self-deprecating humility, she enables her audience to immerse themselves in what was both a unique period in a nation’s turbulent history and a personal life-changing journey.

What a refreshing and informative hour we just spent with Zelda la Grange. In an era of listening to speakers who have found the next best thing or been successful in un-biased achievements of greatness, we had the opportunity to listen to the reality of growing up in South Africa. For a man we all feel that we know so much about, we were enlightened to learn that we know in reality nothing about Nelson Mandela. In the scheme of it all, Zelda continued to learn masterful life lessons throughout her service to this amazing human being.