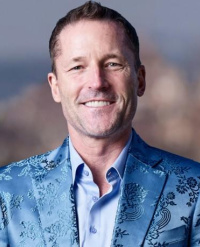 Dr Dain Heer is an internationally renowned author, speaker, and facilitator of consciousness and change. For over 20 years, he has been inviting people to embrace their true greatness—people from every culture, country, age, and social strata of society.

In his talks and workshops, he uses a unique set of tools and provides step by step energetic processes to get people out of the answers, conclusions, and judgments that are keeping them stuck in a cycle of no choice and no change – leading them into the moments of awe that have the power to change anything.

For Dain, judgement is the biggest killer on the planet, especially the judgment of ourselves. Based on his own life experience, he asks: “What if we could get out of the wrongness of ourselves and see every wrongness, the places where we judge ourselves the most, as a strongness? What would be possible then?”

Every year, Dain receives thousands of emails from readers who say that his bestselling book, ‘Being You Changing the World’, inspired them to live. Somehow he is able to lead people out of their self-criticism and the innate feeling of never being enough into a sense of question and wonder and gratitude for being alive.

Originally trained as a chiropractor, he has a completely different approach to healing by facilitating people to tap into and recognize their own abilities and knowing… always reminding them that they don’t have to look outside of themselves for what it is they are seeking, to live without apology, with total presence, no longer needing to hide their differences and unique capacities from the world.

Today Dain is acknowledged worldwide for his unique perspectives on consciousness and personal transformation, which is unlike anything else out there. He is the co-creator of Access Consciousness, along with the founder, Gary Douglas, and also known for his unique energetic transformation process, called The Energetic Synthesis of Being (ESB).

Dain Heer comes from a broken family, growing up with his mother in a ghetto area of Los Angeles. During these years, he was exposed to mental, physical, emotional, sexual and monetary abuse. Everything he chose and wanted was taken from him. Very early on, he learned that he didn’t own anything.

Yet, Dain never chose to be a victim. Instead, he discovered the power of total allowance, courage, choice and resilience. He learned to transform life’s challenges into a gift of strength, awareness, and continuous questions. Along the way, what came forward in him was a true kindness of being and a phenomenal knowing that has made him an agent of change rarely seen in this world.

Reaching far beyond what people say with words, Dain looks at the energy of what is being presented, inviting change at the core of each being he comes across. He invites people to live without apology, with total presence, no longer needing to hide their differences and unique capacities from the world.

What if you, truly being the difference you be, is what this world requires?

A Doctor of Chiropractic, born and raised in California, USA, Dain Heer hosts a regular radio show entitled Conversations in Consciousness on Voice of America. He has been a guest on hundreds of nationally syndicated radio shows. He also has appeared on several TV shows including ‘Fox News’, ‘Good Morning’ Shows in New Zealand, Australia and Canada, and on Gaiam TV.

Dain Heer is the author of more than 15 books on the topics of embodiment, healing, money, and relationships. Being You, Changing the World is now an international bestseller. It was published in June 2011 and has been translated into nearly 20 languages.