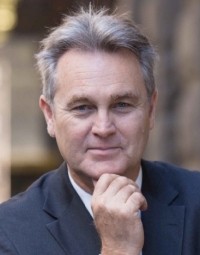 Bernard is an experienced media commentator and a regular guest on television programs. He is also a columnist with The Australian newspaper, a regular on the Australian and, more recently, European and US speaking circuits, and a business advisor.

His bestselling book The Big Shift predicted a surge in the demand for lifestyle and residential property underpinned by the imminent retirement of the baby boom generation. His second book, also a best seller, The Big Picture, looks at how work, life and relationships are changing in the developed world in the early decades of the 21st century.

In his third book, Man Drought, Bernard served up not only his thoughts on the man drought and the odds of finding love in every Australian town, but his take on contemporary social issues around lifestyles, work habits, the future, and an insightful analysis of Australian generations.

A later book, Decent Obsessions: Why it's ok to sweat the small stuff, is largely a collection of his Saturday columns in The Weekend Australian and puts forward the argument that it is the ordinary and dutiful middle class going about their business day-to-day that delivers society its stability and prosperity.

Bernard's latest book, published in 2014, More Decent Obsessions: The Small Things That Tell the Big Picture takes you on a playful yet insightful journey, moving forwards to the 2030s and back to the 1960s examining life, manners and mores to sketch a bigger picture of modern life in Australia.

Bernard predicted the seachange shift last decade and in fact popularised the term nationally.  However, Bernard is perhaps best known over recent years for his popularising of the term “smashed avocado” which is now recognised globally as a symbol of intergenerational differences.

He used the term in a satirical column published in 2016 and since then it has spread globally.  The Americans for example now refer to the avocado toast generation.

Bernard is an experienced and compelling speaker.   His presentations are always energetic, edgy and at times laugh-out-loud funny.  His observations are insightful and his material is fact-based and tailored to individual audiences.