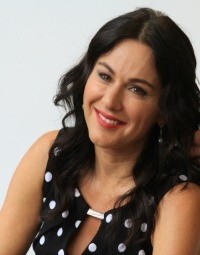 Tania de Jong AM is one of Australia’s most successful female entrepreneurs and innovators with 5 businesses and 3 charities under her belt. She is also one of Australia’s leading speakers and has the voice of an angel. Tania was recently named in the 100 Women of Influence and the 100 Most Influential Entrepreneurs in Australia.

Tania is a global authority on creativity, innovation and collaboration. With a grandmother who invented the foldable umbrella, innovation is in her blood.

Individuals, communities, corporations and governments face increasing challenges and accelerating change, and Tania expand mindsets and inspires audiences to think more laterally and creatively about the future. In 2018 Thinkers 50 invited her to be a keynote speaker and performer at the European Business Forum in Denmark and she was a keynote speaker at the 2019 International Forum on Consciousness in the USA.

Tania has organised the ground-breaking Creative Innovation Asia Pacific Global forum on 8 occasions bringing together international and national leaders to focus on managing and preparing for a rapidly changing world. Creative Innovation Global has received international and national awards including Corporate Event of the Year in the global Eventex Awards.

She received the Order of Australia in 2008 for her work as a performer, entrepreneur and for her impact on education, innovation and the community. Tania’s other awards include Ernst and Young Australian Social Entrepreneur of the Year, the ‘Outstanding Individual Contribution to Australian Culture’, Churchill Fellowship and The Melbourne Award. She was inducted into the AGSE Entrepreneurs Hall of Fame at Swinburne University and named Brainlink Woman of Achievement. Tania was named in the 2016 Impact 25 Awards which honour the social sector’s most influential people for their significant and positive impact in Australia and around the world.

Tania is an agent for change. She is an inspirational and moving storyteller and performer. Her keynotes, combined with the power of song, are transformational. She is known for her ability to unleash creative energy and capabilities, expand mindsets and raise collective consciousness, build ‘can-do’ teams and strategies to develop a culture of innovation, diversity and inclusion.

Tania has an unusual background because her work and knowledge spans the business, public, creative and community sectors. She is therefore able to draw together cross-sector themes relevant to business and government sectors. She is a dynamic and insightful speaker, MC, panel member, workshop leader and performer and enjoys customising her contributions to suit specific client briefs to create outstanding outcomes.

Major clients have included the leadership teams of Woodside, Department of Defence (DST Group), McKinsey & Company, PwC, BCG, AGL, Veolia, Spotlight, David Jones, Perpetual, Telstra, Transurban, ANZ, CBA, NAB, BHP,  Thinkers50, INSEAD Business School, AON, The Florey Institute, CPA, Rotary, various Governments, Universities and schools. She has been a keynote speaker at many leading innovation, education, entrepreneurship and technology conferences and special events including the International Innovation Symposium in Vienna. Tania writes articles and has been featured and interviewed across major media including Huffington Post, ABC, AFR BOSS Magazine, The Australian, The Age, Sydney Morning Herald, 2UE and many others. She has spoken and performed in over 40 countries.

Her TED Talk has sparked global interest. Tania has released 7 albums with her acclaimed singing group Pot-Pourri and has released 3 solo albums including the new release Flying Free.

Tania’s keynote address was an inspiring call to action on our individual and collective creative capacity. And I never thought I would witness our national team in full and rapturous song together. The experience left us all with a sense of unexpected elation!

Tania, thank you so much for being part of BCG’s 50th birthday Celebration Day. The feedback from our staff on your session has been tremendous – it was a real standout for many of us. One of the teams told me that before your workshop, they were struggling to get the rest of their team to engage and be creative and that afterwards, they all wanted to be involved and participate. Thank you for being flexible and accommodating with our event. Your energy, passion, enthusiasm and joie de vivre are a real inspiration. Keep it up

The keynote and ONE TEAM, ONE VOICE Workshop was truly a bonding experience, inspirational to a group in need of self-belief and confidence. In an engaging and memorable way, the team was able to perform as a unit like never before. Something to refer to for a long time!

This golden-voiced diva gave us all goose bumps. Her message was powerful and her never give up attitude was so inspiring. She has clearly earned her success through hard work and extraordinary talent. Entertaining and brilliant!”

Ernst & Young – Entrepreneur Of The Year