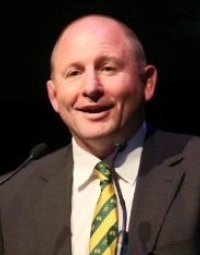 Queenslander Dan Crowley played rugby for Australia in three World Cups in 1991, 1995 and 1999, qualifying him for membership of a most unique international rugby club.

Importantly, he was a member of two winning World Cup teams (1991 and 1999), another rare honour for the Brisbane-born front-rower and one-time undercover cop. Dan is one of only four people to achieve this.

Dan made his debut in Wallaby Gold in the first Test against the touring British Lions in Brisbane in 1989. At state level, the proud Queenslander made 125 appearances for the Reds, making him their most capped forward in history.

In 2003 Dan Crowley made his debut as a member of the Seven Network's rugby commentary team and was widely praised for his insightful, analytical and sometimes humorous comments throughout the season culminating in its Rugby World Cup coverage.  Dan was a member of Seven's commentary team again in 2005 alongside former Wallabies teammate Tim Horan. That year he was named by a panel of rugby journalists and commentators as part of the 'Wallabies Team of the Decade'. He has also worked regularly on radio 4BC in Brisbane.

Incredibly during this time as a rugby representative, Dan lived a dual life as an undercover police agent smashing drug rings on the Gold Coast. His bestseller Undercover Prop, based on his dual life as rugby international and undercover cop, was released in 2005. But Dan's talents extend well beyond rugby commentary and publishing.

In 1990, he founded a one-person investigation company, Verifact Security & Investigations (having previously been the youngest-ever police detective sergeant). Covering the areas of investigation, traffic control, security and training, Verifact is now Australia's largest private investigations agency and employs over 1100 people.

As the front person and strategic leader of the company, Dan understands how to communicate to the internal and external stakeholders. He understands biting off more than you can chew, somehow keeping everyone focused with the outcome while overcoming the difficulties that growth in a business will cause.

Dan is also in great demand as a Master of Ceremonies - his ready wit making him a favourite on the luncheon and dinner circuit.