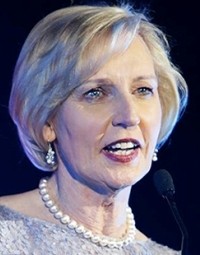 Catherine McGregor is a freelance writer broadcaster and author. She is a graduate of the Royal Military College Duntroon from which she graduated with Honours in History and was awarded the CEW Bean Prize for Military History.  She attended the Changing Character of War Programme at Oxford University and holds postgraduate degrees in War Studies and Military History.  She served as an officer in the Australian Regular Army and the Royal Australian Air Force for over three decades.  Her service included operational deployments overseas including the operational command in Timor Leste.  She is a Tetum linguist.

Catherine was a strategic advisor and speechwriter to every Chief of the Army from 1999 until 2014. She subsequently served in as Director of Research and Analysis for the Chief of Air Force. She was awarded the Order of Australia in the Military Division in the Australia Day Honours list in 2012.

Catherine is one of Australia’s most highly regarded cricket writers and commentators. She has written for News Limited and Fairfax on cricket including two Ashes tours of England. She is currently retained as a cricket commentator and writer by the Australian Broadcasting Corporation. She will lead their television coverage of the 2017-18 Ashes series in Australia. Catherine has written two highly acclaimed books on cricket and is a current player and coach. She serves on the board of Grassroots Cricket and Stands Tall4 PTSD, charities with a cricket focus. She was seconded to the Cricket Australia selection panel to select the Prime Minister’s XI in 2013 and 2014.

Catherine is Australia’s most prominent transgendered woman. Catherine's personal story of gender transition is compelling and inspiring. Her life is the subject of stage production which will be held the Sydney Theatre Company in 2018.

She is a speaker of enormous range, not only does she share her inspirational personal narrative, Catherine also speaks with authority on the impact of disruptive technology on your workforce, global geopolitics and Australian culture and politics. Audiences also warm to her unique insights into Test cricket and the personalities in the global game.

Catherine McGregor was a keynote speaker at the Australasian Legal Practice Management Association (ALPMA) Summit, ‘A Blueprint for Change’, Etihad Stadium, 7-9 September 2016. Catherine’s compelling and inspirational story of change is one of courage, resilience, and determination. She spoke with grace, eloquence, humour and raw emotion captivating the audience who, on conclusion, spontaneously gave her a standing ovation. Catherine imparted a deeper understanding of key business imperatives: Leadership. Diversity and Inclusion. Supportive Culture. Policy Frameworks.