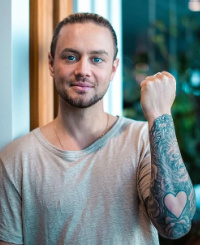 Mitch Wallis is a leader in the mental health space in the Millennial generation with a lifelong mission to empower others to overcome suffering and re-imagine the healing potential of the mind through the power of storytelling, conversation and living with authenticity.

Growing up in Sydney, Mitch lived a very “normal” and privileged life. He was fortunate enough to join Microsoft as an intern when he was 19, the youngest person in the company at the time. After 5 years working in Australia, Mitch was promoted to Microsoft HQ in Seattle USA as global product marketing manager for ‘Surface’ where he worked on some of the biggest launches in the hardware space for the tech giant.

However, that was not the full story. His inside life wasn’t the perfect Instagram moment. Since the age of 7 years old, Mitch has suffered a lifelong battle with debilitating anxiety, OCD, panic attacks, dissociation and depression which has seen him contemplating taking his life. In 2016, he broke down completely, leaving him unable to continue his life as he knew it. His life crumbled around him. He thought it was all over. After seeing a video on YouTube that saved his life, he was able to turn his life around and find his calling in the process.

On the 30th May 2017, his life changed overnight when he released a video of his story, in the hope that someone out there would feel understood and feel less alone by his unexpected yet painfully relatable journey. Within 1 week the video reached over 1 million people and started a global Movement where people all around the world began drawing and tattooing hearts on their arm and sharing their story.

Mitch now devotes himself fulltime to helping solve the single biggest issue facing his generation – mental   health. He is one of the most recognisable mental health speakers in Australia and abroad, having delivered keynotes to tens of thousands of people in the last few years. He has spoken at some of the most recognised companies in the world including American Express, Google, KPMG, Allianz and dozens more. He is a workplace wellbeing consultant - helping companies transform culture and create thriving organisations. He is a notable social media influencer and mental health advocate with over 20,000 followers, and also runs a weekly psychology Podcast called "UNDERSTOOD". He is writing a book called "7 ways to coping" (publishing 2021).

He was appointed the first ever ambassador for the Australia and New Zealand Mental Health association and has been named a Westfield Local Hero in their annual awards. He holds several board and advisory positions – including SuperFriend and the Corporate Mental Health Alliance of Australia. He has featured across Sky News, Channel 10’s The Project, and recognised by GQ Magazine as a Man of Influence.

Mitch is a serial well-being entrepreneur. He is the founder of Heart On My Sleeve - a leading global mental   health movement. The founder of REAL Mates - a training organisation that helps leaders & staff from top multi- national companies lean into the tough conversations. He is also the founder of Calm Water - a relaxation drink company that relieves stress and anxiety. There are many other initiatives to come...

Mitch has a Masters of Psychology degree from Columbia University in New York and a Bachelors degree in Commerce from the University of Sydney. He has done specialised study under leading global psychology teachers including Harvard’s Dr Dan Brown and UCLA’s Dr Dan Siegel. He is accredited in Mental Health First Aid (MHFA) and is a trained Lifeline Crisis Support phone operator.

In his spare time, Mitch is a DJ, certified yoga teacher, boxer, meditation junkie, fashion tragic, pasta enthusiast, tattoo lover, writer and socialite. Family and friends are the most important thing in his life. He has visited more than 20 countries to-date, represented Sydney in squash, and completed the NY marathon. His proudest achievement is doing a handstand whilst beat boxing in front of Cara Delevingne in Brooklyn NY at 3am in front of a hot dog stand.

You will not find someone more passionate about the mind and helping others through challenging mental health issues than Mitch.