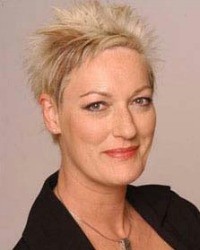 Tracy is a rogue; a rebel; a vanguard fusion artist. Laughing or crying, she’s a drawcard. As a speaker she has accolades from motivating the people you hire: the Australian Institute of Management, Saab Australia, the State Government of Victoria. Ironically, she was in sales and marketing before getting the boot.

At the time, she thought it was funny, so she became a comedian! It wasn’t long before people, intrigued and engaged, asked if she could do more. She could. They asked if Tracy could speak for them and their business communities. She did. And while she had a lot to talk about she did plenty of singing, too … and lots more stand-up … Melbourne, Sydney, Edinburgh. But the voice kept flying.

By 1994, she’d signed on with 94.5FM in Perth and with Fred Botica, the duo had the run of the town for three years. The wave was building. She heard someone calling from Melbourne. It was FOX FM and brekky with Tracy and Matt in the Morning. Her show with Matt Tilley out-whipped Melbourne FM radio for more than six years.

In 2003, she decided to tally-ho some of the breakfast radio hours and spend more time on the boards – corporate board audiences who were due their motivation. In 2005 she blasted through ABC’s 774 studios in Melbourne and in 2006, she and Tim Smith teamed up for Tracy & Tim for Breakfast on Mix FM for two years.

Tracy’s very personal approach comes from a time-evolved trajectory where comedy can be hewn from adversity. A bleak childhood only endowed her with little self-esteem and less self-confidence. She embarked on an infectious drive for enthusiasm with an extreme force of will that continues today. She can show the results of her new life to your people.

Her insights move through a lively 45-minute address starting with her own story, including shaking off her addictions. She then reveals several specific pieces of advice.

Tracy also had a talent and a passion for music so has her own jazz band, The Tracy Bartram Band.