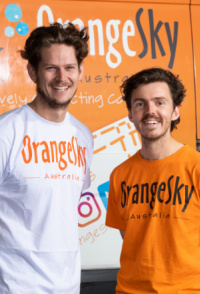 In October 2014, two best mates had a crazy idea to put two washing machines and two dryers in the back of a van, to wash and dry clothes for free for people doing it tough. Nicholas Marchesi and Lucas Patchett were awarded the 2016 Young Australians of the Year and in 2020 the Order of Australia Medal to recognise their founding of Orange Sky – the world-first, free mobile laundry and shower service for people experiencing homelessness.

On a mission to improve hygiene standards for the 116,000 people experiencing homelessness across Australia, Nicholas Marchesi and Lucas Patchett stumbled on something much bigger and more significant – the power of a conversation.

Orange Sky now operates 36 services across 25 locations in Australia and three services across two locations in New Zealand, with continued expansion across both countries. The focus is on creating a safe, welcoming, and supportive environment for people who are too often ignored or feel disconnected from the community.

Since 2014, Orange Sky has provided more than 2.1 million kilograms of free laundry, over 23,000 warm, safe showers, and more than 380,000 hours of genuine and non-judgemental conversation.

Innovation is in the DNA of Orange Sky. Orange Sky continues to priorities finding ways to deliver on its mission through evolving its service offerings and projects. One way this has been done is when Orange Sky won the Google Impact Challenge Grant to take its purpose built technology and further build it to support the not for-profit sector and improve the volunteer lifecycle. 'Volaby' supports dozens of small and large charities across the world to innovate, make data-driven decisions, and harness technology for good.

Orange Sky, under the leadership of Nic and Lucas, are committed to delivering on Orange Sky's 2025 vision to help more than 40,000 people.

The boys are amazing, their vision is humbling and their influence on local communities in incredibly powerful. We are looking forward to being able to support Orange Sky and their endeavours into the future.

Everyone is raving about how fantastic you guys were! All the feedback is that you were the standout SPARK talk, really engaging and managed to make people cry in the space of 3min and 45 sec! Thank-you for being a part of it and representing Australia in such a unique and wonderful way.