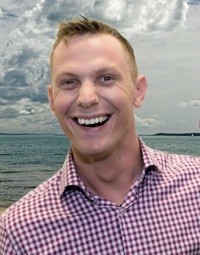 When someone says something is a ‘possibility’ Cam Calkoen sees it as an ‘opportunity’ and the only reason for one to miss out is by not being competitive enough. Competition comes in many forms but as Cam shares a story about the pursuit of human excellence he showcases that our biggest competitor is the one looking back at us in the mirror.

Cam has gone from doubting his ability to run, to representing New Zealand in Athletics, winning championships in New Zealand, Australia and Canada, and now taking his winning attitude into diverse environments that encourage others to achieve their personal best.  From projects that enhance relations amongst people of the world, through to continually pushing through personal, physical and emotional barriers, Cam ensures each day is lived to the max!

Cam's philosophies, values and dynamic vision has led him to working in Japan, building a Tuberculosis Ward and School Library in Vanuatu and regularly having his leadership recognized in the form of awards and scholarships.

In 2006 Cam became one of the youngest recipient’s worldwide to receive a Paul Harris Fellow from Rotary, which he has now received twice. As the project Ambassador for (the YES Disability Resource Centre) Cam was the figurehead of a NZ$4 million project.  During this time he saw the potential in linking his ever-growing network together with young disabled people so they too could develop tools and processes to realize their dreams, from this Cam founded the Carabiner Mentoring program.

Today Cam inspires people with universal backgrounds to dream big, because with big dreams comes a big life. Cam doesn’t hide from the fact that he is still on a journey, that his Everest is yet to be conquered. But perhaps it is his uniqueness as a speaker to be sharing his awesome journey in striving for an awesome outcome that sees audiences connect with his message, and absorb an energy that moves, touches and inspires.

Cam was in one word ‘Awesome’. He was very professional, personable and the way he told his story really resonated with our audience while being entertaining. It wasn’t just another “overcoming hardships” speech which was refreshing. Many of our guests said he was the best speaker they had seen in a long time which is just fantastic.

Cam was absolutely excellent our members were very impressed and found him to be inspiring. We would suggest if there was a way that as many of NZ young people could hear Cam that it should be made to happen. Absolutely fabulous.