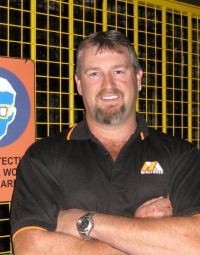 The story of the Beaconsfield miners has a place in history as one of the greatest stories of Australian mateship, courage and survival ever told. Todd Russell and Brant Webb's survival together for 14 days almost one kilometre underground in a 2 x 4 metre pocket of air, almost defies imagination. Todd and Brant's survival together in the most extraordinary of circumstances defies all reason and the realms of possibility. Their story of mateship and never giving up is one that Todd presents in his keynote presentation, and it is one that will be passed down to the generations to come. He is an inspirational speaker with an amazing story to tell.

In April 2006, the world looked on in horror when a minor earthquake rocked the small town of Beaconsfield in Tasmania, collapsing one of the tunnels in a local gold mine. Trapped inside were three miners - Larry Knight, Brant Webb and Todd Russell.

Two days later, the body of Larry Knight was discovered and little hope was held out for Brant and Todd. But five days after the mine collapse, Brant Webb and Todd Russell were discovered to be alive and huddled together in a tiny bubble of air. They were without food or water, surviving only on hope and courage.

They were sent food and water and medical supplies, with which Brant was able to treat the injuries to Todd's leg, with advice from paramedics. It was also on 1 May that the two men also asked about Larry Knight, and rescuers told them that he had been found dead.

The world watched for the next nine days as rescue teams worked around the clock to free Todd Russell and Brant Webb, mindful that the slightest mistake could bring their roof collapsing in on them.

On May 9th, 14 days after the mine collapse, rescue workers finally reached Todd Russell and Brant Webb and brought them safely to the surface. Both Webb and Russell walked unassisted back to the outside world, arms held high in triumph.

Todd was an authentic speaker with a genuine safety story and struck a chord with our audience.

Todd delivered a very personal and powerful message to our work teams while pointing out that safety is everyone’s business and working together is the first step in keeping people safe. Todd spoke candidly with work teams and in relating his own experiences delivered a powerful message which made being safe a personal thing and our work teams think about the safety impacts for their own lives, family and friends. There were a few tears after the slide show.