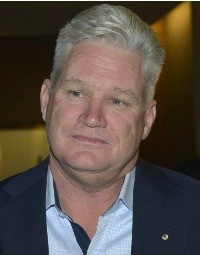 An Australian Cricketing icon, Dean Jones represented Australia in both the Test and One Day formats for over a decade. Amassing over 3,500 Test runs and over 6,000 One Day runs.

A hugely popular player throughout the Australian team, it was the Test in Madras during the tour of 1986 that defined Dean as a player and person. Battling illness and dehydration in the hot and humid conditions of India, Dean bravely fought through many bouts of vomiting on the pitch to heroically make 210 runs. Immediately following his remarkable effort Dean was rushed to the hospital and placed on a drip, in an innings which would go down in Australian Cricket folklore.

Having established himself as an Australian Test player, it was his batting and fielding abilities in the One Day format that really set him apart as a player. Renowned for his ability to take the bowlers on, running between wickets, and his outstanding fielding, Dean's average strike rate of 72.56, was a benchmark in world cricket at the time. The Victorian also had an outstanding first-class record, scoring over 19,000 runs with a high score of 324.

Since his playing days have finished, Dean has held a number of roles both within the cricket and media industries. This includes being the current coach of Islamabad in the Pakistan Super League where he led his team to victory in 2016. In addition to his coaching, Dean currently holds various media roles including Star Sports in India, Ten Sports in India and Sri Lanka, Macquarie Radio in Australia, as well as writing columns for Fairfax Newspapers.