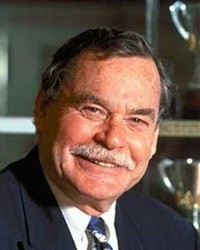 Ron Barassi is an outstanding and successful Australian Football Player and Coach. He speaks on the successfully applied principles and techniques that bring out his, and your, 'super best'.

During his career he played 203 games with the Melbourne Football Club, represented Victoria 18 times, and as player or coach, Ron was in 17 Grand Finals for 10 premierships from 1954 to 1978. Ron Barassi is an outstandingly successful Australian Football Player and Coach, and one of the top motivators in the country.

In October 2006 Ron Barassi was named the 26th official sporting legend in the Sport Australia Hall of Fame. In 1970 Barassi was able to lift the Carlton Football Club team so positively they were able to win the Grand Final after being down a massive 44 points at half time.

The second half revival is now legendary. He went on to the troubled North Melbourne and achieved the club’s first ever VFL Premiership then to the fledging Sydney Swans. Ron has a distinguished playing and coaching career unparalleled in the history of Australian Football and is one of Australia's 0 sporting heroes.

Ron was terrific to the crowd, pleasant and extremely easy to speak with. He was very personable and the crowd loved him.

Very well spoken and inspiring. Many of our guests felt motivated on a personal and professional basis.